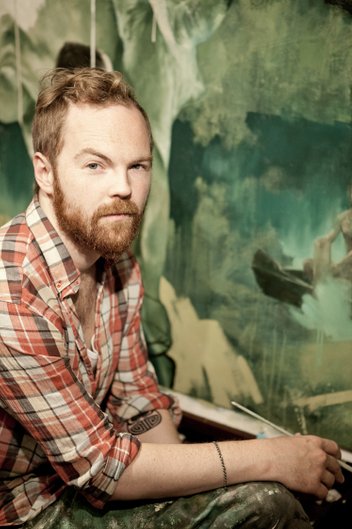 Niklas considers the traditional, time consuming painting techniques he uses as a form of ritual. It’s a conversation with history but also a tool for carefully digging into the subcontious. Painting as a kind of excavation. His focus during the last few years has been to examine the blurry border between the figurative and the abstract and how the two can merge to create new visual expressions.

He has studied art at Konstskolan Kuben and Örebro Konstskola in Örebro where he graduated in 2001. After that he studied at Malmö Comics Art School and worked in the international comics scene for 8 years. In that time his own graphic novel Second Thoughts has been published in 6 different languages and he has done work for a number of different publishers, including Random House Books in New York.

In 2009 he started painting again and after being accepted into the Liljevalchs Spring Salon in 2011 and 2012 he started exhibiting regularly in Sweden and Abroad. He has also worked with public commissions, the largest one decorating a 240 m2 pedestrian tunnel in Vellinge, Sweden.